All posts by [email protected] 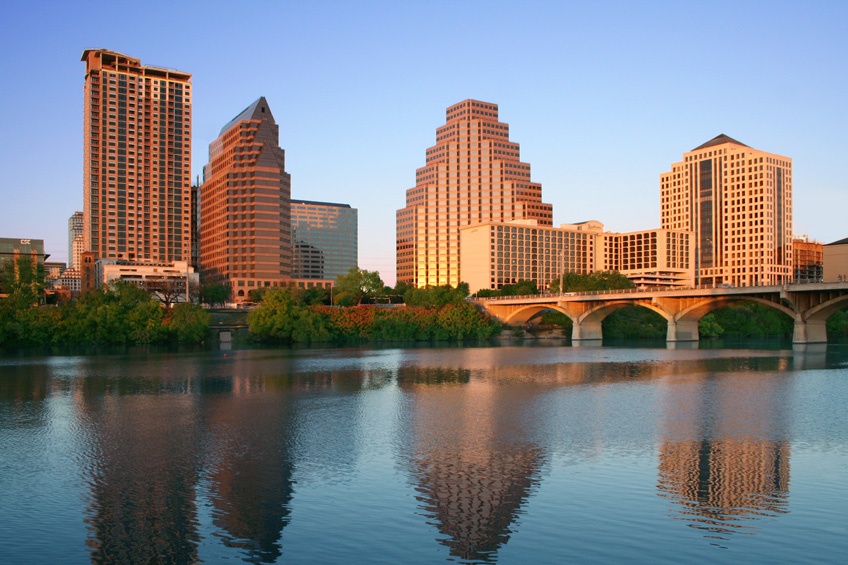 Links We Luv: Austin in the News

Growing up, every year my family would go on a vacation. My family of five would pile into our Ford Conversion Van and my Dad would drive for hours at a time. We went to Florida, Wisconsin, North Carolina and we’ve visited states everywhere in between. Oftentimes, Our Texas license plate would cause people to ask where we were from. The answer Austin, TX would normally provoke a dazed look and the reply “Where?”. This almost always lead to a conversation about how you could find Austin in relation to Dallas, San Antonio, and Houston.

Oh how the times have changed. Nowadays, when I tell people I’m from Austin, it usually results in a response along the lines of “Oh, I just love Austin!”. I can’t remember a more exciting time to live in Austin especially for a food lover.

This edition of Links We Luv, reinforces that sentiment. I’ve shared a couple of great articles about the Austin food scene and the announcements of a couple of interesting store openings. Enjoy! END_OF_DOCUMENT_TOKEN_TO_BE_REPLACED

Up until a couple of weeks ago, La Condesa had been on my “Places to Eat list” for much too long. It took a visit from Anthony Bourdain to finally bump it up to the top of my list.

I loved the atmosphere of La Condesa. The big floor to ceiling windows brought in a lot of natural light. Mixed with the vibrant colors and decorations, the restaurant gave a great first impression.

We started off with the Guacamole Tasting for the table. I thought all the options were good, but my favorite by far was the Chipotle puree and toasted almond guacamole. It had a nice smokey flavor and the chipotle brought a subtle heat without being overly spicy. I also liked the crunch the toasted almond brought.  END_OF_DOCUMENT_TOKEN_TO_BE_REPLACED 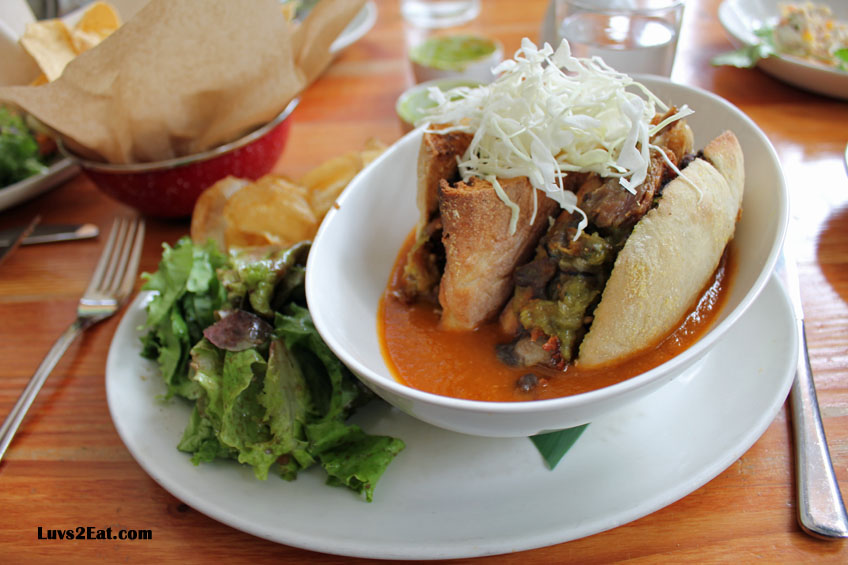 I wrote a Links We Luv post about SXSW a couple of weeks ago and got so much great feedback that I’m planning on making it a regular post every couple weeks. I plan on posting helpful articles I find related to Austin food news, cooking tips, and recipes.

Here’s a recap of my favorite links this week: 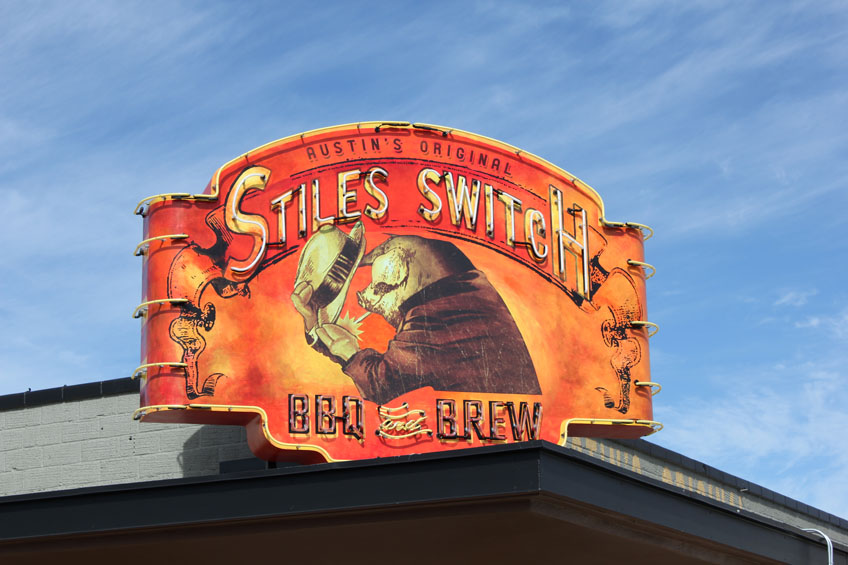 With Franklin BBQ getting so much national attention, you may not have heard about one of the newest additions to Austin’s booming BBQ scene. Opening in December of 2011, Stiles Switch BBQ is definitely the new kid on the block, but they’re serving up  delicious BBQ. Maybe that’s because Pitmaster Lance Kirkpatrick, formerly of historic Louie Mueller BBQ, has been putting out great BBQ for years.

I heard about Stiles Switch when it was mentioned in February’s Texas Monthly Article “Of Meat and Men”  (which is a fantastic article) and decided we’d have to try it out. When we arrived at Stiles Switch BBQ, the first thing I noticed from the outside was how nostalgic the building looked. Located in the old Violet Crown shopping center, they really did a good job of creating that 50’s feel.

The inside was spacious, with a few flat screen TVs showing college basketball games. The walls were covered with photos and neon signs. I really liked the vibe of the restaurant. The staff was super friendly and even took us out back to see the pit. Most importantly, it passed my first test for a BBQ joint. It had to smell like BBQ! 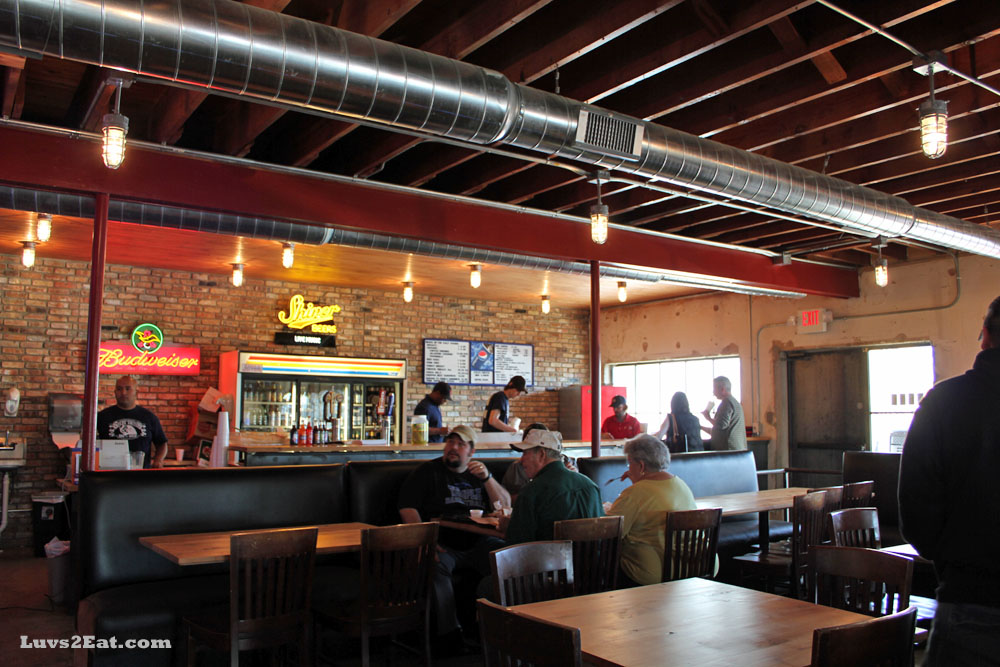 We ordered as much food as we possibly could. We tried the Brisket, Switch Original Sausage, Pork Ribs, Turkey, Potato Salad, Pinto Beans and Lemon Vinaigrette Cole Slaw. The food was awesome.

I especially liked the pork ribs, which were seasoned and cooked perfectly. The moist brisket was outstanding. Not too fatty, with a nice seasoned crisp bark (the outside part of the brisket). The lean brisket was a little dry, but BBQ is not meant to be a health food. Order the moist brisket for Pete’s sake! The turkey was fantastic. The sausage was good, but I’d like to try the jalapeno cheddar sausage on our next trip. We really liked all of the sides. The Lemon Vinaigrette Cole Slaw, which was really refreshing and light. A nice change from most heavy mayo based Cole slaws. For dessert, we tried the banana pudding, which included whipped cream, chocolate pudding and Oreos. Disclaimer: I may be slightly biased here because I love banana pudding and Oreos. When they put the two together it kind of blew my mind. 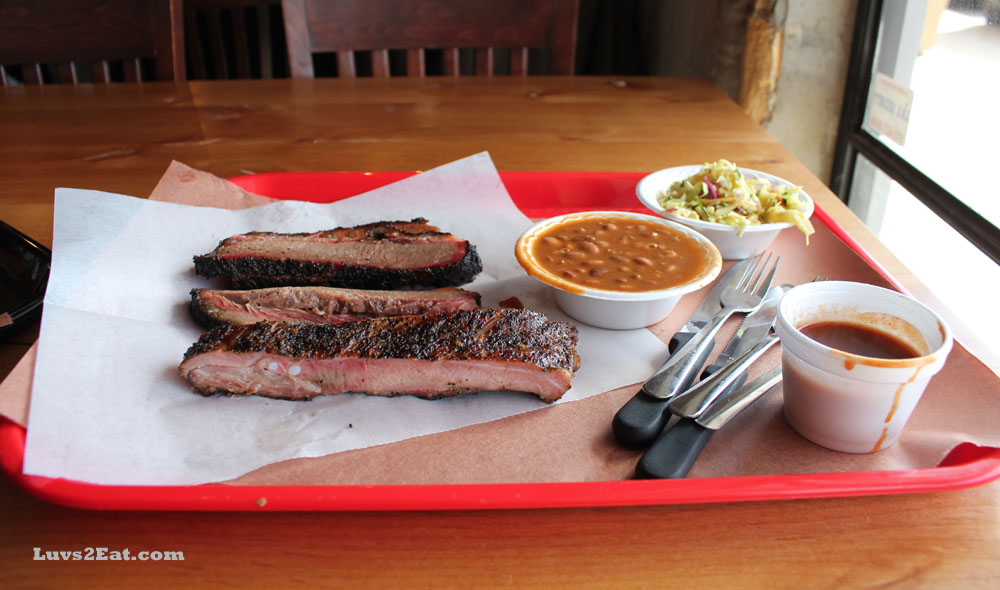 All in all, I’d have to say we really enjoyed our visit to Stiles Switch BBQ and would highly recommend it. It’s hard to believe they’ve only been open for a few months and are probably still working out some kinks. Stiles Switch BBQ is located over in the historic Violet Crown Shopping Center at 6610 N. Lamar. For more information visit StilesSwitchBBQ.com. 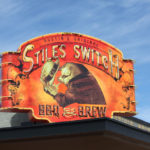 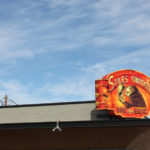 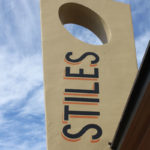 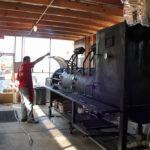 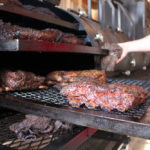 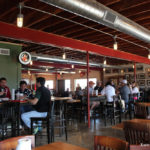 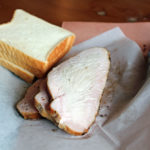 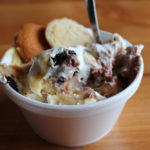 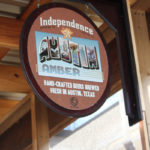 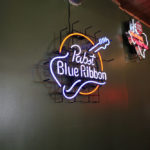 SXSW is upon us and as a food blogger, one of my favorite parts of SXSW is the food of course. Austin’s food scene has really blown up over the past couple of years, so I’m listing some links to help you navigate the Austin food scene while you’re here.

And for some of our personal favorites:

Being born and raised in Texas, I’ve been eating BBQ as long as I can remember. One of my favorite BBQ memories growing up was my family’s frequent trips to Pok-e-Jo’s. We spent many special family occasions celebrating birthdays, Fathers Day or any other holiday. BBQ had a way of bringing our family together.

The BBQ phenomenon was not something that happened with just my family. BBQ in Texas has had a way of bringing families together for generations. Recipes and techniques have been handed down from generation to generation often times kept as a family secret. Although their recipes may remain secret, some families have turned their BBQ into a profitable business. In fact, there are hundreds of BBQ joints that have succeeded to do just that.

It would take a lot of time and effort to find all of these wonderful BBQ joints, but author Gloria Corral has made this easy for us by creating a comprehensive guide for Austin-area BBQ. Investing more than two-years of hands on research, the Barbecue Lover’s Guide to Austin puts the Central Texas BBQ scene at your finger tips. The Guide features, not only the famous BBQ joints you’ve heard of, but all the hole-in-the wall joints, shacks and trailers you may not know about. We thoroughly enjoyed reading through the book and would recommend it for any BBQ lover out there.

Thanks to the folks over at Music Box Media, we have an extra copy to give away to one lucky reader. To be entered in the drawing simply leave a comment about your favorite BBQ Joint by 11:59 p.m. on Saturday, March,10. Be sure to include a valid email address so we can get in touch with you. Winner will be chosen randomly using random.org.

It’s time for the NFL Playoffs, which means the Super Bowl is right around the corner (Go Pack Go!) and you know what that means. It’s time for tailgating! Aside from brats and cheese curds, one of my favorite tailgating foods is buffalo chicken wings. The problem is chicken wings aren’t exactly healthy and it’s way too early in the year to start breaking my New Year’s resolution.

This buffalo hummus recipe is a healthy alternative to buffalo chicken wings. Serve it with a side of pita chips or veggies for a quick and easy tailgating snack. Enjoy! 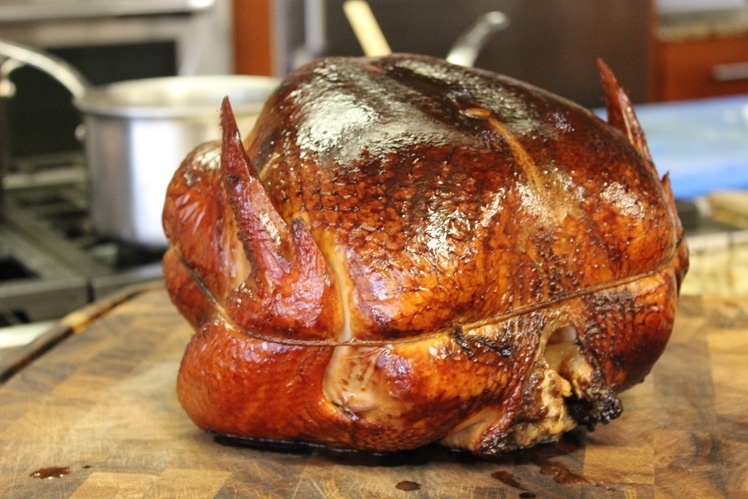 By [email protected] | Uncategorized | No Comments

I’m making my first turkey this year. Because I was a little nervous about it, I’ve spent the past couple weeks preparing to roast my first turkey. I’ve read magazine articles, blog posts, and watched YouTube videos. My wife and I even attended a turkey cooking class so we would be ready.

Unfortunately, there’s not a whole lot of time left to get your turkey started, so I’m sharing some of my favorite turkey tips I’ve picked up over the past couple of weeks. Happy Thanksgiving and good luck!
[list type=”numlist”]

Do you have any favorite turkey tips? Please share them in the comments. 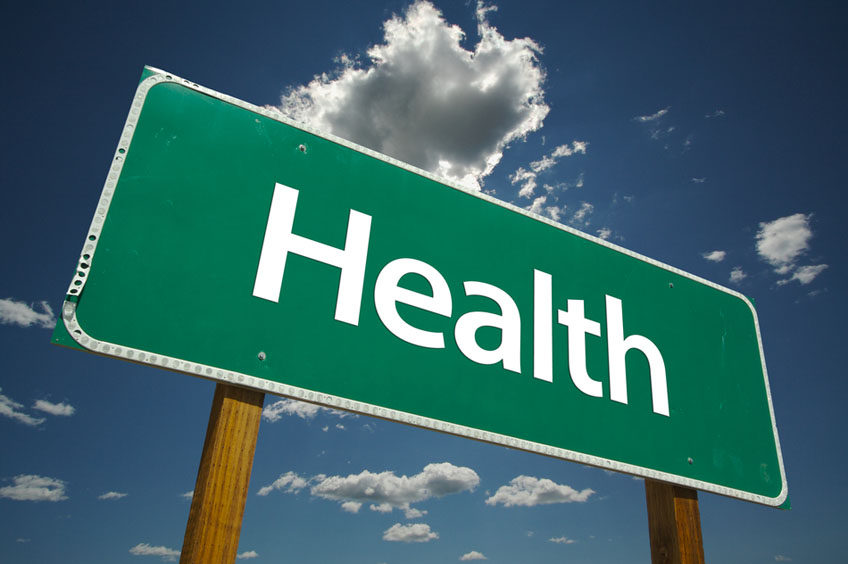 As you may have noticed, I’ve taken a short break from blog posting recently. A lot of family stuff has been going on, which prompted me to visit the doctor to get myself checked out. Unfortunately, I wasn’t all that happy with what I found out. Like millions of other Americans, I have high cholesterol. I was a little shocked to find this out. At only 28, I hadn’t ever really considered having cholesterol issues. Yes, I know I need to lose a few pounds, but I count calories and I try to watch my carb intake. Cholesterol was really the last thing on my mind.

As a food blogger, this is particularly hard for me to deal with. I enjoy going out to eat and trying new recipes at home all of the time. My passion is to cook, my wife’s is to bake and when I heard the news I initially felt that this was going to be the end to our foodie adventures. After thinking about it for a while, I’ve come to the realization that good food doesn’t mean it has to be unhealthy. A real chef can take on the challenge of creating dishes that provide short term enjoyment without a long-term negative impact on your health.

Instead of giving-up on the blog, I’ve decided to embrace that challenge. That’s why over the next few weeks you’ll see a shift in what we write about on Luvs2Eat.com. Does that mean we’ll stop eating out completely? No. I’m not giving up enjoying the occasional trip out to a new restaurant (and we’ll still write about it). Does that mean we’ll stop creating delicious desserts? No. A dessert every now and then is OK. Moderation is key, right? What you will see is interpretation of our favorite dishes with twists to make them more heart healthy. An attempt to continue to enjoy the foods we luv, with a more health conscious focus. It will be a journey and learning experience for us, and I hope you’re willing to join us for the ride.

If you’re interesting in learning more about Cholesterol, here are a couple of helpful links from the American Heart Association to get you started:

What Your Cholesterol Numbers Mean 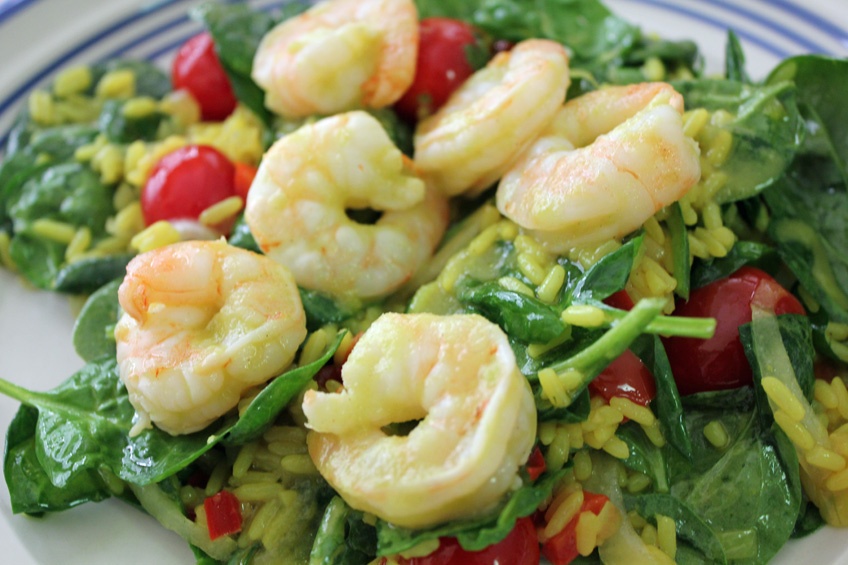