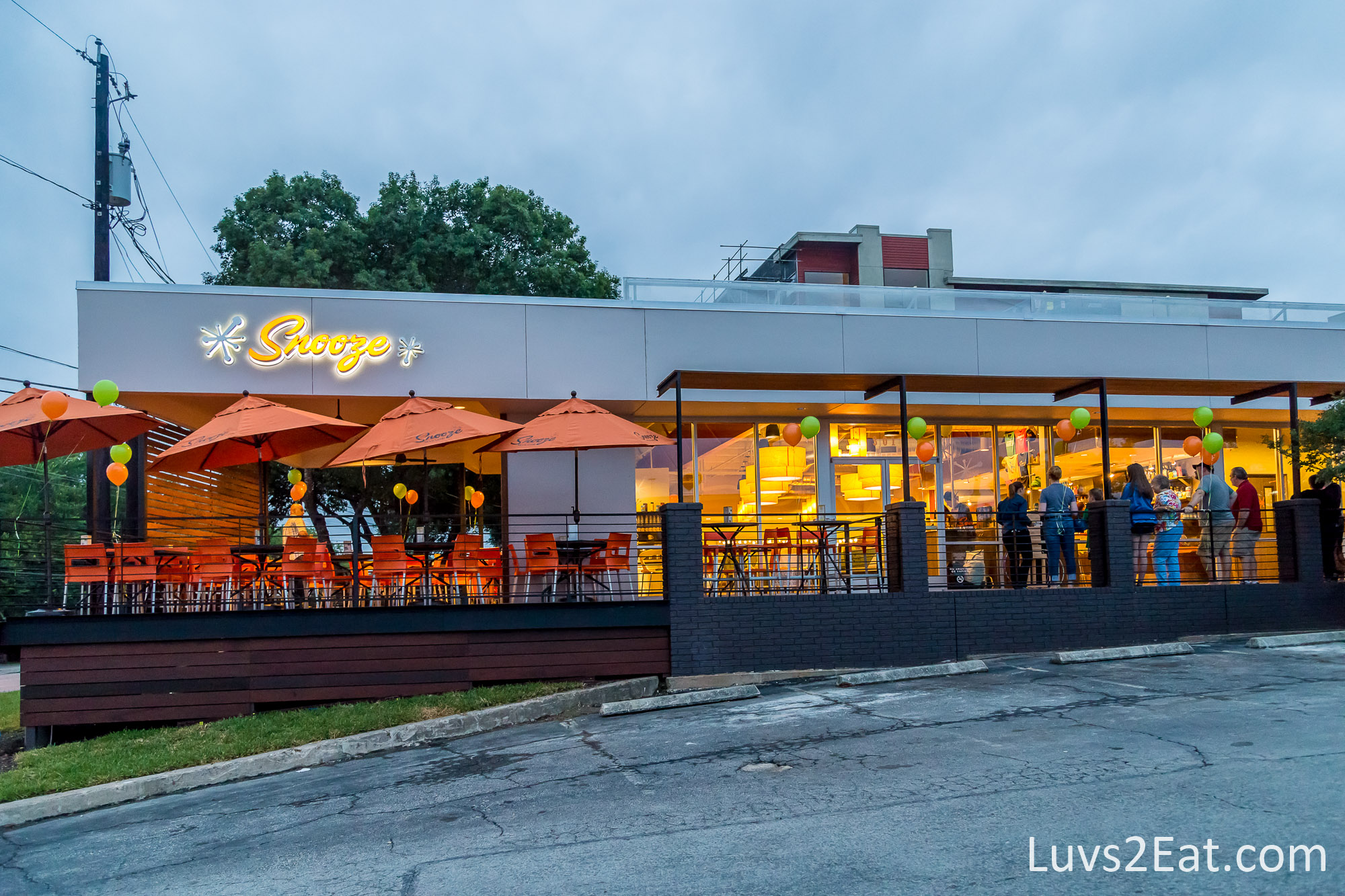 We first stumbled upon Snooze on a trip to Denver back in November of 2014. At the time, we felt like it would fit right into the Austin dining scene. I mean who in Austin doesn’t love all-day brunch? Well, back in April of 2015, Snooze announced they would be opening an Austin location and we have been waiting (im)patiently ever since. After several delays (hey, they wanted it perfect), Snooze is finally open on South Lamar! The manager also mentioned a June opening for the North Lamar location.

First word of warning. Don’t just type ‘Snooze South Lamar’ into Google Maps and then drive. Google doesn’t seem to know where Snooze is yet. That’s probably why we ended up at Zilker Elementary instead of brunch. Oops. 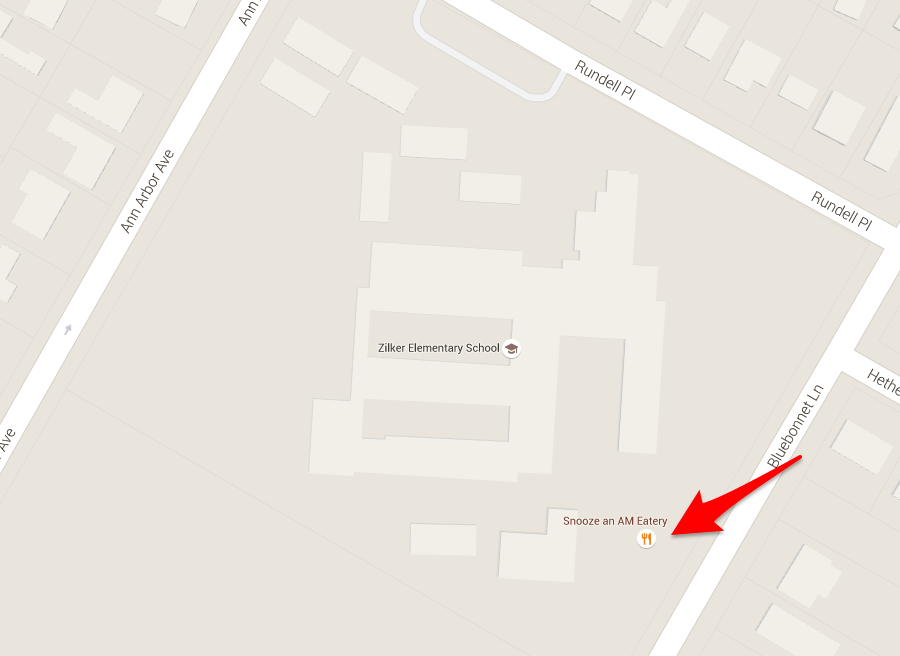 Not knowing what to expect on their first, full-service day, we decided to show up early. But John, who on Earth would wake up at 5 a.m. and drive 30 minutes for brunch? Well, I’m glad you asked. If Austin folks are ok with waiting in line 4 hours for Franklin BBQ, how long will they wait for a delicious brunch? And in my defense, there was a line when we arrived. Yes, it was only 10 people, but I’m not the only crazy person.

But what about the food? Did I mention how much I love brunch? The food was great.

Snooze offers a wide-variety of food, but the pancakes were a popular choice. My personal favorite is the blueberry danish pancakes, which are topped with blueberry coulis, sweet cream and almond streusel surrounding a center of lemony cream cheese filling. Our servers favorite was the Cinnamon Roll Pancake, which is super hard to find on the menu (it’s listed in the a la carte section), but definitely worth trying. We also tried ‘The Goodness Cake’ which is a pancake made with Whole Wheat and quinoa topped with blackberry maple syrup, honey-lemon yogurt and seasonal berries. Sounds gross, right? Wrong. It was SO good! That’s probably where the name came from.

So between 4 people, we ordered 11 pancakes. Technically we ordered 10, and then our sever gifted us with a bonus pancake. Clearly, 10 pancakes didn’t seem like enough. Let’s just say 11 pancakes was way too many for 4 people. Did I mentioned we ordered other food? 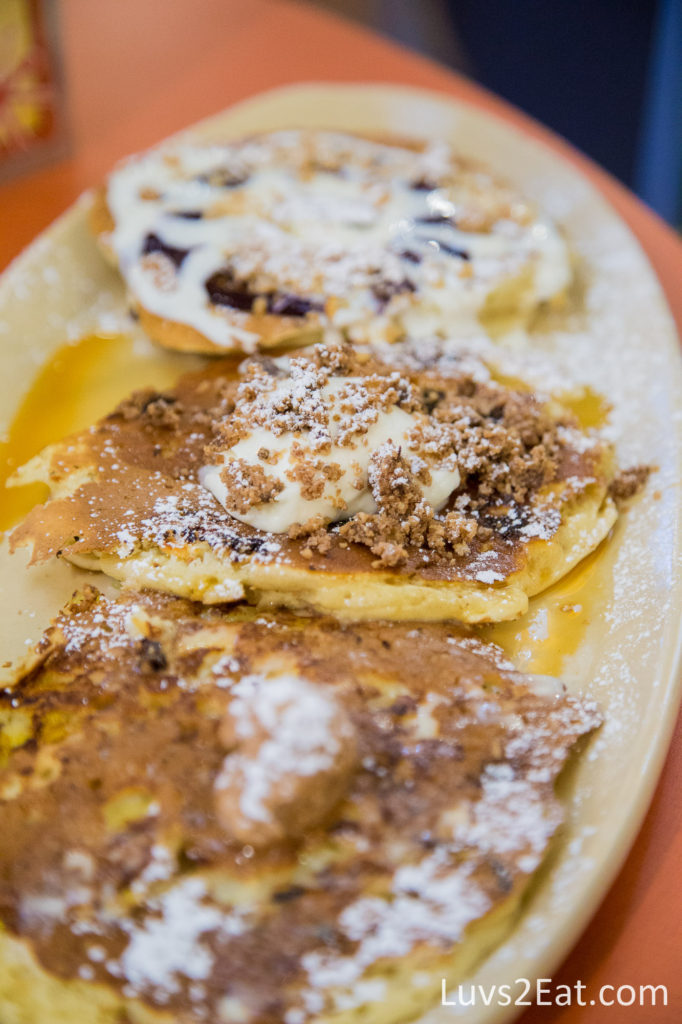 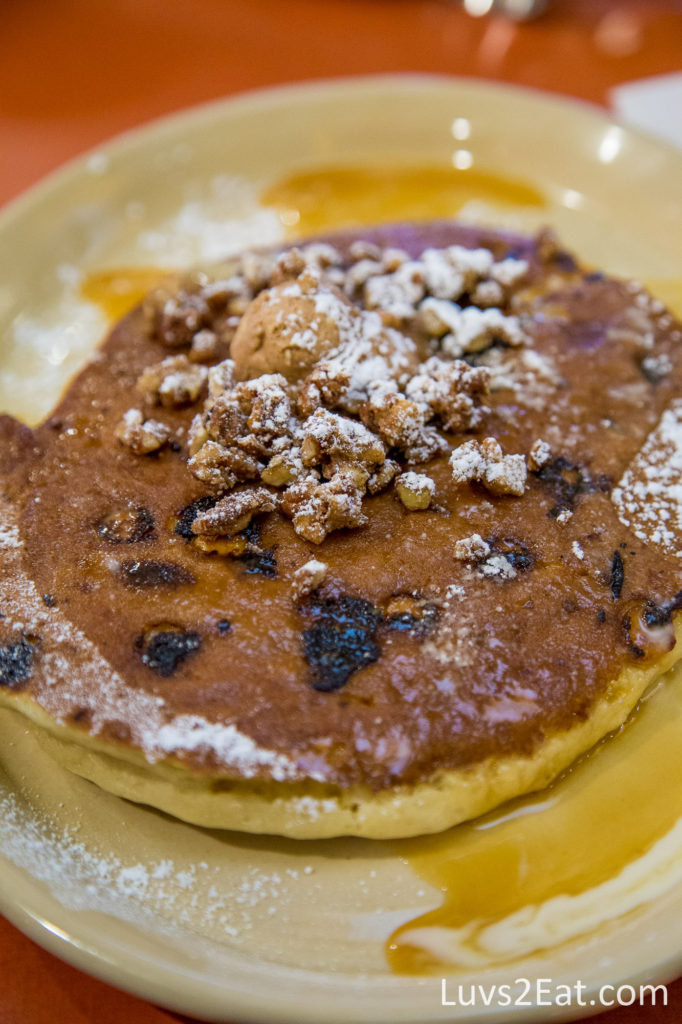 Snooze apparently makes more than just delicious pancakes. They also make other great brunch foods. I’ve had the Corned Beef Hash before, and I had a hard time resisting the urge to order it again. But alas, I did not order it.

I decided to try a Benny Duo, which was clearly added to the menu for indecisive orderers like myself. (Technically orderers isn’t a word, but I’m running with it.) The Benny Duo allows you to order two Benedicts on one plate. Two Benedicts, one plate! I went with the Chile Verde Benny which is slow cooked pulled pork over a stack of green chile sauced tortillas and melted cheese with poached cage free eggs and green chili hollandaise, pico de gallo and cotija cheese. My second choice was the Bella! Bella! Benny which is thin slices of prosciutto, Taleggio cheese, and poached eggs on toasted ciabatta, topped with cream cheese hollandaise, balsamic glaze and spinach. They had me at balsamic. I would totally eat both again. 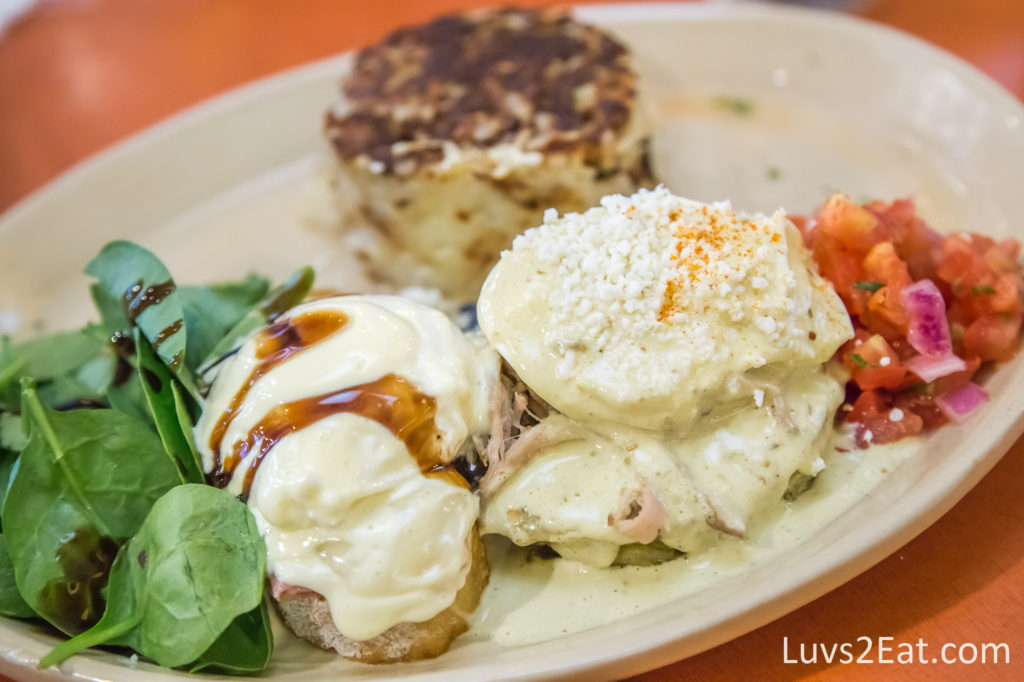 Snooze has really adopted that Austin vibe using local ingredients, and serving Cuvee coffee. I love the atmosphere. The decor is great. I really liked the round booths. The staff was so friendly. I mean our server told us how proud she was at the amount of food we ate. I left full. I left happy. I left wanting to come back again in 6 hours when a normal person eats brunch. That’s a successful first dining experience at a place that I had very high expectations for. 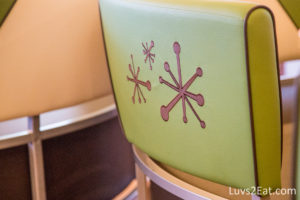 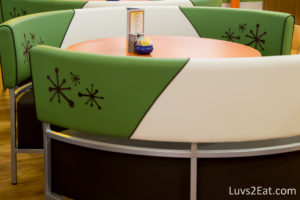 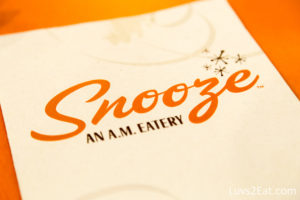 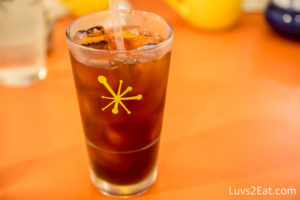 This is John. Don’t get lost like John. Plug this address into your phone: 1700 S. Lamar Blvd suite 301 Austin, TX. It’s in the same plaza as Picnik if you know where that’s at.

Visit Snooze online at http://snoozeeatery.com/. The Austin menu isn’t online yet, but is similar to the Denver menu.

John lives in Austin, TX with his wife and blogging partner, Diana, and black lab retriever, Kosmo. When he's not busy with his day job, Product Marketing Manager, or writing at Luvs2eat.com, he enjoys running, cycling, photography, video games, grilling, reading, eating and spending time with his family. You can contact John by email at John AT luvs2eat DOT com.